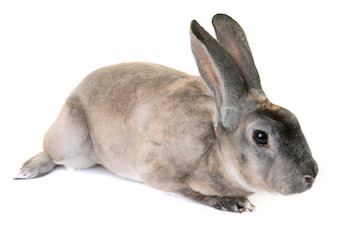 Did you know that a Rex rabbit is one of the most expressive bunnies you can find? A Rex will tell you immediately how it feels, which makes them so easy to love!

Rexes need a lot of love, but it’s also easy to give it to them because they’re so affectionate and docile.

However, there are plenty of mistakes you can make.

Excessive grooming, bathing, and giving them the wrong food are just a few examples.

If you want to keep your Rex happy and healthy, read the article below.

The Rex rabbit is a smart, loving breed with strong mothering instincts. In fact, the Rex does is often a surrogate mother for other abandoned kits. The Rex bunnies come from 1920s France, so here are the main points from their century of existence:

If you want to find out more about the official description of the Rex bunnies, the ARBA tells you that these rabbits are:

The Rexes can be distinguished from other breeds because they have a wider face than other bunnies. Their ears are proportionate and erect on top of their heads, while their feet are smaller.

Just like other large bunny breeds, including the Angora rabbit, the Rex rabbit does have a neck skin flap which is called a dewlap. The dewlap is an evolutionary adaptation to the environment and it serves to keep young kits warm.

As such, the Rexes and other rabbit breeds can survive outdoor conditions, which can be more convenient for some owners.

The average Rex is a round, fattish rabbit that can grow to be one foot long. The ideal weight is between 7.5 and 10.5 pounds.

The Rex’s coats are their pride and joy because they are incredibly velvety, soft, and thick. The hairs are the same length and evenly distributed all over their bodies.

Although the Rexes have short hair, between 0.5 and 0.9 inches, their coats feel very plush. Unlike most rabbit breeds, their fur points out, and that also contributes to their plushness.

Sadly, their rich coats are what destined the Rexes to the fur industry when they were first bred.

Now, however, the Rexes are recognized for their smart and affectionate personalities, not just for their coats. And luckily for all Rex owners, Rex’s special coats don’t need as much grooming as you would expect.

But we’ll discuss that in the Care/ Health section below. Now, let’s see what colors your Rex rabbit can be.

You can find the Rex rabbits in twenty-five colors, but not all of them are officially recognized.

The Rex’s typical colors are:

The USA recognizes these colors too:

Rex Rabbits have a pretty good lifespan and reduced infant mortality because they’re born with fur. Combine that with the mother’s dewlap and the kits’ chances of surviving harsh conditions increase exponentially.

Rex baby rabbits are incredibly cute. Expect your doe to give birth to a small litter of around four babies if you get a smaller type of Rex, or a bigger litter of 6-12 kits if you get one of the larger Rexes.

Rex Rabbits live between 9 to 12 years, but dwarf types like the Mini Rex can maybe hope for a maximum of 6 years. If you decide to neuter/ spay your dwarf Rex, its chances of survival increase by approximately three years.

Thanks to their wonderful personality and fairly easy maintenance, Rex Rabbits make wonderful adoptive children for people who want to adopt their first rabbit and for seniors, though others can certainly provide good homes for the Rexes.

Here is some advice on how to take care of them best:

As with other rabbit breeds, the Rexes need a good home as well. Before buying a cage, consider two factors:

Pro tip:  You should spot-clean your bunny’s cage every day. Change the bedding once per week, and do a general disinfecting once per month.

Rex Rabbits need to socialize for various reasons including:

You and your human family should play with your Rex as much as possible because that’s what builds the bond between you. Your bunny will become gentler and easier to tame.

You can allow your Rex to come out of the cage anytime you can be 100% there for playtime. A rabbit-proof room is all your Rex needs, but some people decide to rabbit-proof their whole house.

Rabbit proofing is important because bunnies love to chew. This instinct allows them to wear down their teeth, which never stop growing. Chewing through furniture or clothes is the least of your problems. Disaster can strike if your bunny decides to chew on wires or a plant that’s potentially toxic to them.

Unlike other rabbits, Rexes won’t sneak out through crevices or holes, and they can decide when it’s time to relax in their cages.

You can also adopt two Rexes, but it’s important either to neuter a pair of different sex rabbits, or adopt a pair of females/ males.

You can allow your Rex to play outside in your garden, but make sure it’s well fenced. A pen is probably a better idea for extra security.

Don’t expose your Rex to other pets, like cats and dogs, who have an acute predator instinct. The Rexes have good prey instincts, and they’ll be scared by your other pets’ behaviors. Stress is debilitating to rabbits, particularly long-term stress because it increases their cortisol levels which, in turn, wear down on their immune systems, making them more prone to various diseases that decrease their life expectancy.

Rex Rabbits, just like most bunnies, need to eat 70% hay and 30% high-quality pellets. Opt for an orchard or timothy hay, but limit the intake of alfalfa hay.

You can give your pet Rex some fruit and vegetable snacks, but only one piece a couple of times per week as a treat or reward. Do your research first and make sure these snacks are safe.

Although rabbits get most of their water intake from hay, it’s also a good idea to give them unlimited access to clean water.

Although Rexes have a thick, velvety coat, they only need to be brushed once per week with a soft comb. You can increase the brushing frequency during the shedding season, as needed.

Avoid over-grooming. A Rex’s hair is nothing like human hair, so brushing them constantly won’t make their coats look shinier. Excessive brushing damages Rex’s coats because it makes the hair brittle.

You will also need to cut their nails once per month, but you can expect to do it more frequently, depending on the rabbit.

Rex Rabbits are sweet-natured and gentle. They love being picked up by their human family, particularly if you allow them as much free access around your home as possible.

The Rex will allow everyone in your family to pet it, but it will favor the person who dedicates the most time to it.

Rexes are low-maintenance and playful. You can even trust your kids with it, as long as they are old enough to understand that rough-housing a rabbit is not allowed.

The Rex is also a moody type of rabbit. Although they are generally gentle, they can also get mad or sad, resentful, brash, stubborn, or even destructive. From that point of view, you can say that Rex Rabbits have a personality almost as complex as humans.

Of course, there are many things you can do:

Conclusion. Should You Get a Rex Rabbit?

Rex Rabbits are cute, funny, playful, and gentle. They can also express their feelings accurately and have a lot of energy. Rex Rabbits need constant affection and a nurturing, safe environment.

Rex Rabbits are low-maintenance, so they’re suited for new bunny parents as well as seniors. People with allergies have more chances of getting along with a Rex with short hair that doesn’t shed than with a furry Angora Rabbit.

That said, remember that the Rex will need a lot of your time. Are you up for the job?