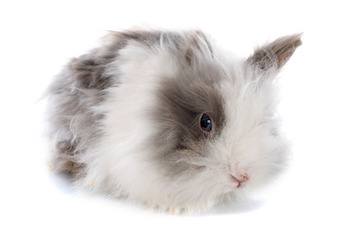 The Angora rabbit comes with a history as thick and tangled as its fur. Luckily, these woolly love balls are sweet-natured and docile, so they make wonderful pets.

But it’s not easy to care for them. You will need to spend a lot of time grooming them and checking for signs of possible infections.

What type of Angora bunny should you choose, though? How can you take care of it best? What’s their personality like? And finally, why does everyone say the Angora rabbits came from their country?

Find out the answer to most of these questions below.

The size and weight of these bunnies are different for each of the four breeds the ARBA recognizes. But if you’re looking for average indications, these bunnies are small, with a medium body weight between 2 and 5.5 kilos, though some can get even bigger.

So let’s see how these fluff masters look like.

They have very thick wool and they are the smallest of the four breeds, weighing between 2 and 3.5 kg. The unique feature they sport is fur that covers their eyes. No other rabbit, or arguably, human has bangs as cool as these pets!

The French Angoras are a bit bigger than their English counterparts, weighing between 3.5 and 4.5 kg. You’ll recognize them because they don’t have wool either on their faces or on their front paws. Their hind legs sport some funny tufts, which look as funny as they sound.

Other than that, French Angora bunnies have:

Now let’s talk about the characteristics of this big ball of fur. Giant Angora rabbits are the largest type of Angora bunnies vetted by the ARBA and get up to 5.5 kg.

They are only accepted in one variety: white with red eyes.

It’s fair to say they are quite large and boast a lot of thick wool. The fact that they are raised for their wool shouldn’t come as a surprise.

Honorable mention: German Angora Rabbits – although they are not recognized by ARBA, they are often mistaken for the Giant Angora. This is the breed for major fiber production.

The Satins are not as woolly as their other Angora counterparts, but they are smoother and silkier. You can recognize them by the ton of guard hair and erect ears. They can weigh between 3.0 and 4.5 kg.

Satins also sport a lot of colors. They can be:

These Angora rabbits can live as little as 7 years, or as long as 12 years, which makes them good companions for the long term.

The four Angora Rabbit breeds are fairly similar in terms of care and health tips and advice. Let’s see what you can look out for:

Angoras have thick, long and smooth wool, so you need to comb them regularly. Two or three times each week is enough, but make sure to use a slick brush, like you would for your cat. You will have to brush them more often during the shedding season.

You will also need to trim your Angora bunny regularly. Take him to the rabbit hairstylist at least three to four times per week to make sure your pet is clean, healthy, and handsome.

Pro tip: Have a bag ready when you brush these furballs for the… furballs.

Angoras have thick wool so they don’t need to be kept warm. You can even install their cage outside, but then you will have to block the wind by using plastic or wooden walls on three sides of their cage.

Angoras don’t do so well in hot weather because they have such thick wool. It’s better to move them inside in an air-conditioned room if the temperatures go through the roof. If you can’t place the cage inside, make sure you place it in a shaded spot and put a bag of ice inside for some improvised cooling.

The crate should be accommodating, meaning wide enough for these bunnies to roam around, sleep, eat, hide, and play. Large wire cages are your best choice.

Spot-clean the crate every day, and change the bedding as needed, meaning at least once, if not twice, each week. DO general cleaning and disinfecting once per month.

Angora rabbits should eat about 6 ounces of high-quality pellets with lots of protein, and a lot of high-quality timothy hay. Offer your rabbits vegetable treats occasionally, but don’t overdo it. Two or three small pieces per week are more than enough.

If you have a baby Angora, don’t offer it any pieces of fruits or veggies yet because they’re too young. Babies’ diets should consist mainly of quality pellets, although adult rabbits need 70% hay and 30% pellets.

Don’t forget about the water. Although rabbits will get most of their water from hay, they still need to have access to fresh, clean water when they need it.

Play with your Angora rabbit as much as possible. These Angoras are fun and playful, so they need time indoors as well as outdoors.

Make sure the enclosure is safe, whether you place a doggy pen outside or allow your rabbit to roam freely in one of your rooms.

It’s a good idea to play chaperon if you have smaller children in your house. Generally speaking, children under 10 years old are more likely to trigger your rabbit’s prey instincts with loud noises and sudden movements.

Stress affects your rabbit in weird ways, from GI disturbances like bloating and diarrhea to immune issues that make it more prone to parasites, cancer, or heart issues.

It’s a good idea to keep your Angoras separate from other pets that might scare them, such as cats or dogs. If your rabbit’s cage is outside, make sure no wild animals can have access to it, whether foxes or birds of prey.

Angora rabbits are prone to all the rabbity afflictions in the book, though some problems are more likely to happen to them because of their fluffy, woolly exteriors.

The main issue is known as wool block.

Rabbits are great self-groomers, but the Angoras have a lot of hair to groom. That’s why they will eat loose fur which forms hairballs in their stomachs.

You’d think evolution endowed Angora bunnies with the same ability to vomit hairballs that cats possess, but unfortunately Mother Nature did not. Basically what happens is that Angora rabbits will fill their bellies with hair and die of inanition because the fur they’ve eaten makes them feel full all the time.

You can avoid this with regular grooming and trimming, as well as noticing the worrying symptoms. If your rabbit doesn’t eat enough, you should take it to the vet as soon as possible.

Other health issues include:

The Angora rabbit babies are woolly balls of cuteness and playfulness. One litter can have between 2 and 12 kits, so you’ll end up with a lot of baby Angoras if you’re not careful.

These little ones require special care. Don’t force wean kits that are younger than three weeks, but you can offer them a taste of alfalfa hay after they’re over this mark.

You can start giving them access to hay and pellets once they reach 6 weeks of age, and a taste of vegetable snacks when they’re 12 weeks old.

Apart from the health issues, the Angora adult rabbits are prone too, babies are also prone to enteritis when their owners feed start them on a pellet-rich diet too soon.

All Angora rabbit breeds are gentle and docile because they have been bred for their furs for so long that they no longer have a problem with being picked up, touched, and petted.

Angora bunnies are playful and gregarious. They enjoy playing with other rabbits as well as humans, they run after toy balls and chew wood blocks, but they also love their naps. From that point of view, you could say that Angora bunnies are the ideal mix of friendly dogs – sleepy cats.

Angora rabbits make wonderful pets because they are friendly and not that weary of strangers as other rabbit breeds. You can allow them to hop outside in your backyard or nod off with one on your lap while reading or watching TV.

But the more you allow them to play outside, the gentler and sweeter they will be when they’re back home.

Angora rabbits can also be potty-trained, but your job won’t be as easy as with a dog or cat. You’ll need to place about five to seven litter boxes in your home, covered with the same type of material as the corner of the cage where they poo and pee most frequently.

Angora rabbits don’t just have a lot of fur. They also have a lot of history. If you’re a trivia buff, here are some of the highlights surrounding this breed:

In Conclusion – Should I Get an Angora Rabbit?

Angora rabbits are perfect for people who spend a lot of time at home because they thrive on attention and love. Single people, child-free couples, or couples with older children make the best human families for the Angora bunnies.

Keep in mind, though, that most of their health issues derive from the fact that they have thick, woolly fur. That’s why you need to dedicate a lot of time grooming them and checking them for ticks or insect bites.

That said, do you plan to buy or adopt an Angora rabbit?